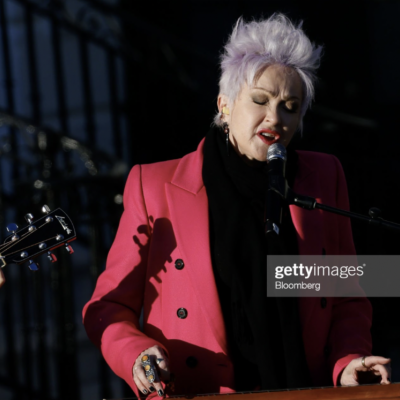 December 13, 2022 – GRAMMY, Emmy and Tony Award-winning artist and tireless LGBTQ+ and women’s rights advocate Cyndi Lauper performed at The White House this afternoon to commemorate the signing of the Respect For Marriage Act. The Respect For Marriage Act will recognize any marriage between two individuals that is valid under state law regardless of their gender or race. Lauper performed “True Colors,” a song from her sophomore album that has been embraced for the past three decades as an anthem of liberation in the LGBTQ+ community across the globe. The event also featured performances from Sam Smith and the Gay Men’s Chorus of Washington D.C., before remarks from The President, Vice President, Speaker Nancy Pelosi and Senator Chuck Schumer.

“Today is about families. LGBTQ and interracial couples can go to sleep tonight knowing that their families are safe and sound,” said Cyndi Lauper. “I am honored to help celebrate the generations of activists who bravely fought to make sure that love wins in the end. Thank you to President Biden, Vice President Harris, Speaker Pelosi and the Senators and Representatives in Congress for your leadership and putting aside partisan divides to ensure this fundamental right. Now, Americans can love who they love.”

Lauper has previously visited The White House to attend the signing of The Matthew Shepard and James Byrd Jr. Hate Crimes Prevention Act in 2009, and in 2015 spoke there on the issue of LGBTQ+ youth homelessness after testifying before a Senate Committee hearing on the issue.

Lauper has been fighting for the underdog – especially the LGBTQ+ community, women, and people living with HIV/AIDS – for decades. She co-founded True Colors United in 2008 to bring an end to homelessness amongst LGBTQ+ youth, who make up to 40 percent of the 4.2 million youth who experience homelessness each year in the U.S. Over the past 14 years, the nonprofit organization has had an indelible impact on ending youth homelessness in America and has worked with countless other organizations focused on equality, including the Human Rights Campaign and Planned Parenthood. In October of 2022 she established her Girls Just Want to Have Fundamental Rights Fund at the Tides Foundation to support organizations that advance women’s rights and health. The first year’s grants will primarily be given to organizations that are ensuring access to abortion and reproductive health services.